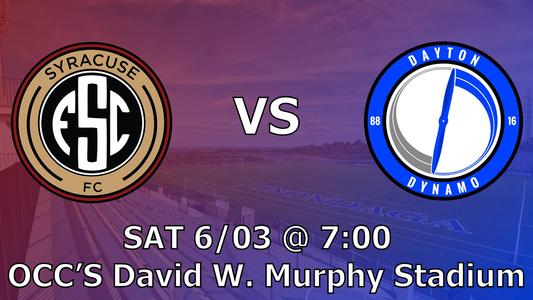 Syracuse FC, Central New York’s new NPSL team, will host the Dayton Dynamo on Saturday, June 3rd. CNY soccer fans can cheer on their new hometown team at 7:00 pm, when Syracuse FC will try to turn the field in the second of their back-to-back matches against Dayton, this time at home at OCC’s David W Murphy Field.

After a close 0-1 loss against the Eastern Conference leader on Dayton’s home turf last Sunday, SFC is poised to grab their first win this Saturday, with the help of their enthusiastic supporters and fans. Saturday’s match will be the third home game of SFC’s inaugural season, which kicked off on May 20th with a crowd of 2,037 at Murphy Field. Even the rain couldn’t dampen the enthusiasm of the more than 1,100 SFC fans who attended the second home match vs thruway rival Rochester Lancers on May 26th.

SFC takes to the road again next weekend for a thruway rivals double header. They will face the Rochester Lancers on Wegman’s Field on June 9th, then continue west for their first match against FC Buffalo at Robert E Rich All High Stadium on June 11th. Syracuse FC’s next home game will be June 14th, when they will welcome FC Buffalo to Murphy Field for a rematch.