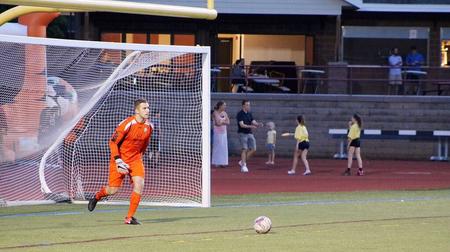 ​Syracuse FC came up short at 0-2 against the Rochester Lancers in a rematch between the Eastern Conference Thruway rivals on Friday evening at Wegman’s Field in Rochester.

It was a tale of two halves on Friday night, with each team controlling offensive opportunities over the course of separate 45 minutes, and the match was played closer than the scoreboard showed. Syracuse FC had a number of chances in the first half, but were unable to capitalize. In the second half, the Lancers were able to produce two goals.

SFC began the match by controlling possession and pressured the Lancers early. Two early crosses tested the backline of the Lancers in the first five minutes. On the third such cross in the 8th minute, Jake Kohlbrenner played the ball to Ben Ramin, who put a shot on goal that was saved by Lancers goalkeeper William Banahene.

The Lancers’ Will Stone got behind the SFC defense in the 10th minute, but pushed his shot just to the right of the goal post. Moments later, Stone attacked SFC goalkeeper Pat Castle, who made a timely kick for the save. The first corner of the match was taken by the Lancers in the 15th minute and was played into the box, leading to an impressive save by Castle.

A clever SFC offensive run in the 17th minute resulted in the 17th minute resulted in two shots wide of the net. Just five minutes later, Adnan Bakalovic produced a shot on goal, set up by Nate Bourdeau, that was dealt with by Lancers goalkeeper Banahene. Not to be outdone, Stefanos Stamolocatos took a pass from Ma’Cain Spragling and used his left foot to produce a curling shot that narrowly missed the top of the goal and connected with the goalpost.

SFC continued with their offensive attack in the 31st minute when Wyatt Scott played a great cross in to Ramin who misconnected with his shot to the right of the goal. Two minutes later Castle made a head on save.

Lancers goalkeeper Banahene misplayed a ball just outside of the box in the 40th minute. The ball was passed to SFC’s Ramin, who attempted a quick chip shot that was ultimately caught and secured Banahene.

The start of the second half began with SFC making their first substitution of the match: forward Jerjer Gibson in for midfielder Kohlbrenner.

In the 47th minute, Stone of the Lancers was able to capitalize on a counter attack that took Castle out of the net, scoring a goal to put SFC behind 0-1. Three minutes later the first caution was awarded when August Finn of the Lancers picked up a yellow card for an illegal tackle on Scott.

The second substitution for SFC was made in the 64th minute when Moulid Somow came in for Scott.

The second goal of the match was scored by Mike Cunningham in the 69th minute off a long range shot, doubling the Lancers lead to 2-0.

SFC’s third substitution was made when Luiz Mota replaced Bakalovic. The second yellow card of the match was administered to Antonio Manfut of the Lancers in the 75th minute for a tackle on Ramin.

SFC turned on the pressure following the second Lancers goal. This pressure resulted in a terrific chance for SFC in the 79th minute, when Stamoulacatos delivered a crafty shot from just over 20 yards out that had to be saved with a dive by Banahene.

Over the final 15 minutes of the match, Castle played superbly and made five saves.

During stoppage time, Domenico Vitale picked up two yellow cards to reduce SFC to ten men, but Zikret Osmic of the Lancers also received a yellow card in one of the encounters.

Syracuse FC vs FC Buffalo: Syracuse FC headed further along the Thruway on June 11th, to face FC Buffalo for the first time. They wrapped up their Western New York road trip with a disappointing 1-5 loss to Buffalo on Sunday afternoon. They entered Robert E Rich All High Stadium down two players, due to an injury and a red card (two yellow cards for Domenico Vitale) from Friday night’s game in Rochester. The 2:00 pm match was characterized by eventful offense and scoring for both NPSL clubs.

The scoreboard operator was put to work early in the match when FC Buffalo’s Isaiah Barrett scored in the 9th minute. Off a second consecutive corner, FC Buffalo controlled possession and Barrett finished the close-range shot.

Luiz Mota began SFC’s offensive with a shot on goal that tested FC Buffalo goalkeeper Jeremy Figler. Moments later, in the 21st minute, Figler was unable to stop a tap-in opportunity for Jake Kohlbrenner that evened the score at 1-1. Nate Bourdeau created the chance by dribbling to the end line and producing a crafty cross that Kohlbrenner put into the back of the net. This marked the first goal for Kohlbrenner as a member of SFC.

Adding to the scoring, FC Buffalo retook the lead in the 23rd minute in a display of poor luck for SFC. Bayley Winkel produced a shot that hit the cross and ricocheted off the post, ultimately deflecting off SFC goalkeeper Pat Castle barely past the end line.

FC Buffalo was awarded a free kick in the 35th minute from approximately 20 yards away. Akean Shackleford’s shot looked to be an upper 90, but was beautifully saved by a diving Castle, in arguably the best save thus far this season for the SFC goalkeeper, who already has made a wide range of impressive stops.

FC Buffalo scored their third goal 50th minute. Off a corner, David Enstrom collected the ball in the box and placed his shot just out of the grasp of Castle.

Minutes later, Bourdeau attempted to jumpstart the SFC offense with a technical dribbling exhibition that forced Figler off his goal line to stop the one-on-one chance.

In the 63rd minute, following a SFC defensive turnover, FC Buffalo added to their lead when Shackleford got on a breakaway and put the shot around Castle. Shackleford then received a yellow card when he celebrated his team’s fourth goal by taking off his jersey.

SFC’s Cameron Pashley made his SFC debut in the 69th minute when he replaced Adnan Bakalovic.

FC Buffalo finished their offensive output in the 76th minute, when Julien Dragomir scored to increase FC Buffalo’s lead to 5-1.

During the closing minutes of the match, Jake Cooper of FC Buffalo earned a yellow card, and midfielder Bryan Sibble entered the match, his first time taking the pitch for SFC.

Syracuse FC will return home on Wednesday, June 14th when they will welcome FC Buffalo to OCC’s David W. Murphy Field for a rematch.
​​