​Syracuse FC earned a critical point following a 1-1 draw against the undefeated Erie Commodores on a sultry June evening in front of 1,056 spectators at OCC’s David W. Murphy Field in Syracuse, NY. The draw resulted in Syracuse FC going undefeated for the third straight home match, after beating the Dayton Dynamo 1-0 on June 3rd and FC Buffalo 2-1 last Wednesday.

Shortly following SFC’s opening kick, Stefanos Stamoulacatos earned three consecutive corner kicks that were dealt with by Erie’s defense, but they set the tone for the remainder of the match.

Goal scoring began early for Syracuse FC, when Logan Roberts cleaned up a shot struck on goal by Luiz Mota in the third minute and finessed it past Erie goalkeeper Jorge Prendes from close range. This goal marked the first for Roberts this season and gave SFC a 1-0 lead.

Shortly following Roberts’ goal, Erie began to push the pace and increase their offensive attack. This resulted in a shot on goal in the 9th minute that was swiftly saved by SFC goalkeeper Rob Larkin. This match marked the first start in net for Larkin.

​In the 19th minute, Adnan Bakalovic created a potential opportunity for Roberts to add to his goal tally with a beautiful through ball on the right side of the pitch. Roberts delivered a strike that sailed slightly above the goalpost.

A yellow card was assessed to Erie in the 24th minute for fouling Roberts before a potential SFC offensive counter. Two minutes later, Stamoulacatos had a beautiful cross across the pitch to Mota on the left side, but Mota’s shot slightly missed the right goalpost.

In the 37th minute, defender Sam Daniel entered the match for Bakalovic as a first half substitution.

The first 45 minutes saw outstanding team play for Syracuse FC marked by a lot of pretty passing. Going into halftime, the home club was leading Erie by a goal, 1-0.

The match’s second half began with some quick scoring much like the first half, this time for the Commodores. Thaylan Maria Sanches Silva scored a goal in the 49th minute off a curling corner to tie the match at 1-1.

Seven minutes following his goal, Maria Sanches Silva was awarded a caution for pulling Mota’s jersey and impeding his movement.

In the 68th minute, SFC made their second substitution of the match when Callum Donnelly entered for Luiz Mota. Connor McGoldrick made his SFC debut in the 72nd minute, subbing in for Stamoulacatos in the midfield position.

Larkin came up big in the 80th minute when he made a great save off a threatening corner set piece to keep the match level. In the 82nd minute, Jerjer Gibson came on for Bogdan Yatsishin, as an additional offensive threat on the pitch for SFC.

​During the closing minutes of the match, in the 84th minute, Nate Bourdeau had a chance to put SFC in the lead on a volley shot, but the valiant effort went just wide of the goal.

The final substitution for SFC was Wyatt Scott entering for Roberts in the 86th minute. Following a frantic three minutes of stoppage time, SFC and Erie had their match result in a 1-1 draw, with each club receiving a point for their effort.

“Well played for us tonight,” said SFC Head Coach Matt Tantalo, “and great to get the early goal. Things are coming together.”

Syracuse FC and the Erie Commodores will meet for a rematch next Friday, June 23rd, at Gannon University Field in Erie, PA. Syracuse hopes to earn three points in Erie, continuing their climb up the NPSL’s East Conference Division standings.

Syracuse FC final League home match will be on Friday, July 7th at OCC’s David W Murphy Field, when they will take on the Fort Pitt Regiment at 7:30 pm. Match day tickets are available at the box office beginning one hour prior to every home game. Syracuse FC merchandise is available for purchase at syracusefcshop.net. 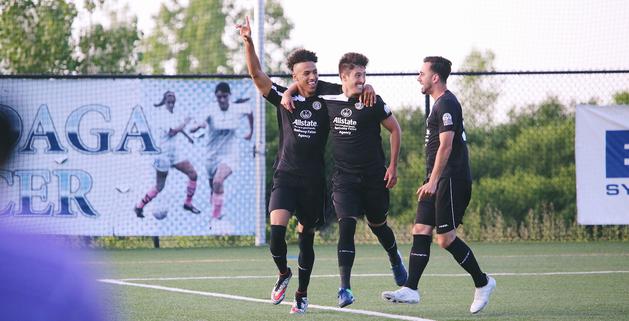