The match may have been regarded as a friendly, but the players didn’t seem to notice and played with intensity throughout. Following Super 9’s opening kick, both teams displayed pace and aggression on the pitch. Scoring opportunities were present for both clubs in the first 15 minutes, but solid defending and off-target shots kept the game scoreless. An early SFC corner resulted in a header by Ben Ramin that was pushed just over the goal. A free kick by Super 9 in the 8th minute from about 20 yards out sailed right of the goal.

Ma’Cain Spragling was the opening goal scorer of the match in the 16th minute. Spragling produced a shot that deflected off the Super 9 defense into the back of the net to give SFC an early 1-0 lead. The goal marked SFC’s first ever scored in a friendly match, and it was the first of the season for Spragling.

The 21st minute of the match saw Adnan Bakalovic’s shot deflect off the crossbar, somehow not crossing the goal line. Moments later, Bogdan Yatsishin’s nifty cross on the left side of the pitch met Luiz Mota, who had his header find the Super 9 goalkeeper’s mitts.

A hand ball on the Super 9 defense in the 27th minute led to a free kick taken by Mota from 20 yards out that was blocked by the Super 9’s wall. Jake Kohlbrenner followed this up by delivering a powerful curling shot on goal in the 31st minute that had to be dealt with by Super 9’s diving goalkeeper.

Offensive possession and pressure were controlled by SFC for the first half of the match, but Super 9 was able to find the break they were looking for in the 43rd minute, as a quick counter led to a breakaway goal. This evened the match at 1-1 going into halftime.

​The second half began with Logan Roberts quickly putting SFC back on top 2-1 in the 47th minute on a beautiful pass from Bakalovic into the center of the box that Roberts effortlessly put into the back of the net. A yellow card was assessed to Super 9 in the 59th minute for a foul on Yatsishin.

A goalkeeping blunder for Super 9 in the 67th minute led to Roberts taking away the clearance to tap the ball into goal, as he was alone with the net. The goal was the second of the game for Roberts, fulfilling his brace for the match.

One minute later, Ryan Matthews added to the scoring to make it 4-1 SFC, as he converted a cross pass from Bakalovic off a corner. The goal marked the second assist of the evening for Bakalovic, who showcased his passing skills throughout the match.

During the closing minutes of the match, SFC controlled possession, but was unable to add another goal. Leonardo Rubio had the best opportunity, with a header in the 88th minute that was saved by the Super 9 goalkeeper. The match ended with a Syracuse FC victory of 4-1 over Super 9 Pro SC, increasing to four the team’s undefeated-at-home streak.

SFC’s final League home match will be on Friday, July 7th, when they will welcome the Fort Pitt Regiment to OCC’s David W. Murphy Field at 7:30 p.m. Match day tickets will be available at the box office beginning one hour prior to the game (at 6:30 pm on July 7th). 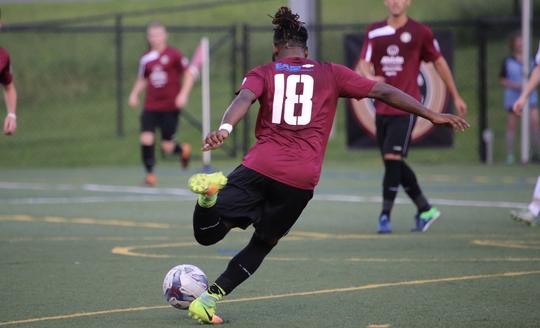