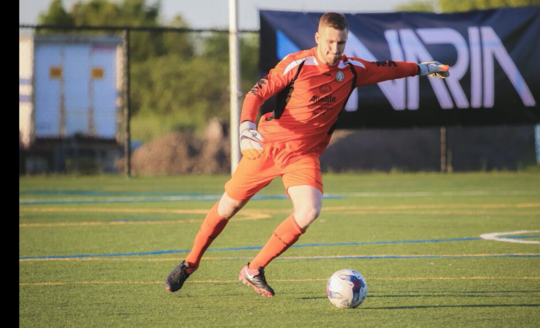 July 1, 2017: Syracuse FC fell to AFC Cleveland by a score of 0-2 at Independence High School in Independence, Ohio. The late afternoon match was characterized by physical play, as seven yellow cards and one red card were assessed.

Following the opening kick, the two teams took turns controlling  offensive possession in the attacking third of the pitch. This resulted in a number of corners and shots on goal in the beginning of the match. AFC Cleveland got on the scoreboard in the 32nd minute on a header by Tom Beck to give the home team a 1-0 lead.

Throughout the first 45 minutes, goalkeeper Pat Castle made a number of impressive saves for SFC to keep the score at 0-1. Stoppage time in the first half saw a chance for AFC Cleveland to score, but Domenico Vitale blocked the close range shot by Vinny Bell.

The second half began with Sam Daniel entering the match for an injured Wyatt Scott. In the 56th minute, Ma’Cain Spragling received a red card in an encounter that also saw three AFC Cleveland players receive yellow cards. Following the red card, SFC played the remainder of the match with 10 men.

After a valiant 20 minutes of defense by SFC, AFC Cleveland was able to add to their lead when David Jordan scored on a header in the 76th minute, bringing the score to 2-0.

As the second half of the match progressed, Adnan Bakalovic and Leonardo Rubio entered the match as substitutes for Bogdan Yatsishin and Logan Roberts, respectively.

During the closing minutes of the match, SFC increased their offensive attacking and shots on goal, but AFC Cleveland goalkeeper Anthony Flowers made a number of impressive saves to keep his clean sheet intact. At the match’s final whistle, Syracuse FC was defeated by AFC Cleveland by the score of 2-0. Castle finished the match with eight saves and SFC put four shots on goal.

Syracuse FC’s final League home match will be on Friday, July 7th, when they will welcome the Fort Pitt Regiment to OCC’s David W. Murphy Field for a 7:30 pm game. Match day tickets will be available at the box office beginning one hour prior to the game (at 6:30 pm on July 7th).