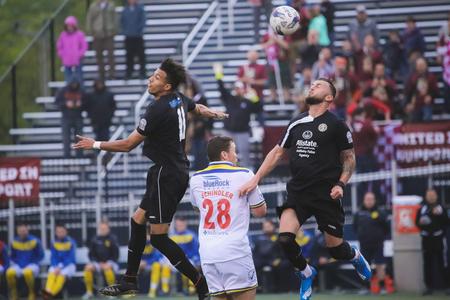 The cities that are home to these two teams are only about 90 miles apart, but on the pitch they seemed even closer. After 90 minutes, the scoreboard read Syracuse FC 0 - Rochester Lancers 2.  SFC ended the match with 13 shots and 7 saves. Despite the misting rain and chilly temperatures, the 1109 spectators at Onondaga Community College’s David W. Murphy Field were exuberant throughout SFC’s first thruway rivalry match.

The match began with offensive possessions by both teams in a back and forth affair. In the 12th minute, Adnan Bakalovic continued SFC’s attacking presence by drawing a foul in the offensive half. This resulted in an early opportunity for SFC, but the free kick was dealt with promptly by the Lancers backline.

In the 14th minute, Bo Jelovac, gaining separation from the defense, had a high-velocity shot hit the side of the net.

The 17th minute saw the match’s first high percentage scoring opportunity. Slavisa Ubiparipovic began the break by finding Nate Bourdeau in a scoring position that was ultimately saved by Lancers goalkeeper William Banahene. This was followed by a header on goal by Ryan Matthews that was also dealt with by Banahene.

Matthews continued his solid play on the defensive half of the pitch by blocking a shot that was destined for the goal. Soon after, in the 29th minute, Pat Castle made an impressive save on a shot off a Lancers corner kick.

In the 30th minute, Antonio Manfut delivered a powerful shot on goal that was routinely saved by Castle near the right post to keep the game tied at 0. To close the first half of play, Ben Ramin curled a cross into the box that was dealt with by a Lancers defender.

The first goal of the match was scored in the 52nd minute by the Lancers’ Glenn Holmes off a rebound of Castle’s save in front of the net.

Just a few minutes later, SFC’s attack resulted in a free kick and a yellow card given to a Lancers defender. Ubiparipovic took the free kick and connected on a powerful shot that sailed just to the left of the goal.

The first substitution of the game for SFC occurred in the 61st minute, with Jerjer Gibson replacing Jelovac at the forward position.

SFC continued to put pressure on the Lancers defense by winning two additional free kicks and drawing another yellow card. In the 66th minute, Ubiparipovic took the free kick and missed his shot only inches from the right of the net.

The second goal of the match was scored off a Lancers corner in the 72nd minute, doubling Rochester’s lead to 2-0.

Luiz Mota made his SFC debut in the 78th minute when he replaced Bakalovic and immediately made his presence felt, delivering a quality corner that had to be dealt with by the Lancers defense. Just two minutes later, Ryan Matthews produced a powerful shot that hit the crossbar.

Two substitutions were made for SFC in the 83rd minute: Marcello Palucci for Ubiparipovic and Stefanos Stamoulacatos for Logan Roberts.

The match ended in seemingly fitting fashion. Mota had two quality shots that barely missed the target, and Ramin produced a shot that hit the right post before the referee blew the final whistle.

“It was a tough match to lose,” said Head Coach/GM Matt Tantalo. “I thought we carried the play for most of it and created enough chances to win. Can’t give up soft goals on corners and that was the difference. We’re going to learn from this one and will continue to get better.”

SFC quickly hits the road tomorrow for their first away match. They’ll be facing Dayton Dynamo at Dayton’s Roger Glass Stadium on Sunday, May 28th at 4:00 pm. 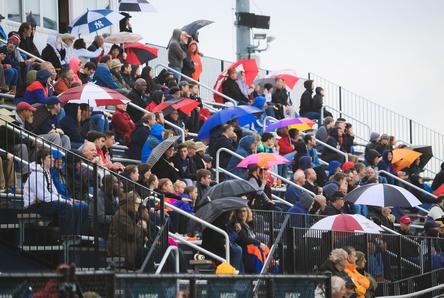