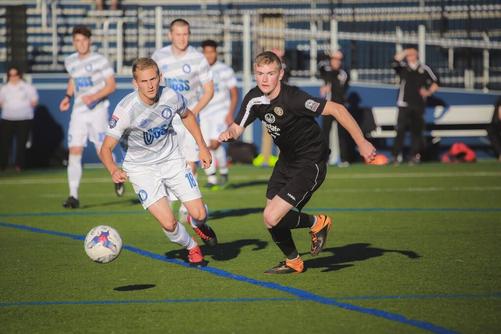 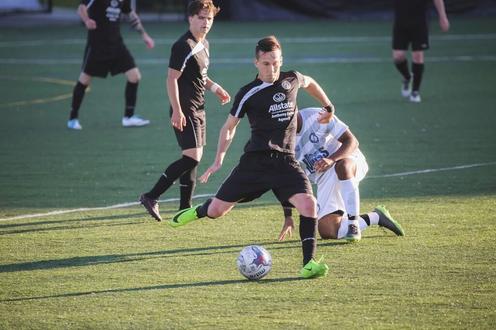 History was made Saturday evening in a gritty rematch between Eastern Conference foes. Syracuse FC defeated the Eastern Conference leader Dayton Dynamo 1-0 for their first-ever win as 1,012 fans cheered on their new hometown team at OCC’s David W. Murphy Field.

SFC faced the Dynamo just last Sunday in Dayton and came away with a 0-1 loss, but they knew a home win was within their grasp. During the match’s entertaining 90 minutes, Syracuse FC produced 7 shots and 5 saves. The Dynamo finished with 11 shots and 0 saves. SFC came away with their inaugural victory and three points, scoring the lone goal in the 42nd minute.

Both teams came charging out of the gate. SFC earned a corner kick in the 7th minute, resulting in a scoring opportunity for Ma’Cain Spragling that was blocked by the Dynamo defense. Just one minute later, Dayton played the ball into the box, but Pat Castle was able to make the save.

Slavisa Ubiparipovic produced a quality shot that narrowly missed to the right of the goal in the 12th minute. Several long balls were played in an attempt to break Logan Roberts free on the right side of the pitch, but all of them were broken up by Dayton’s quality defense.

In a match with five cautions, physical play was evident throughout. The first yellow card was handed out in the 31st minute to Christopher Dupont of the Dynamo for a tackle on Ubiparipovic.

Late in the first half, SFC continued to attack offensively. Nate Bourdeau delivered a through ball to Roberts in the center of the pitch, whose shot was blocked by the lone Dynamo defender between him and the goal.

Bourdeau led the break once again in the 42nd minute when he passed to Adnan Bakalovic down the left sideline. Bakalovic returned the favor, giving the ball back to Bourdeau, and the midfielder was able to put his shot into the back of the net.

The second half began with Bo Jelovac entering the game for Callum Donnelly in the 45th minute. Just moments later, SFC had an early chance to add to their lead when Ubiparipovic produced a cross that Roberts headed just wide of the Dynamo goal.

Early in the second half, Dayton dominated possession but wasn’t able to capitalize on any scoring opportunities. Although they were tested, SFC defense was quality when it mattered most. The 58th minute saw terrific team defense when defender Wyatt Scott made a point-blank block as he headed a threatening Dynamo shot away. Castle cleaned up the rebound, making a save right near the goal line to keep his clean sheet intact.

A physical confrontation between SFC’s Domenico Vitale and Dayton’s Matt Kinkopf in the 61st minute resulted in a yellow card for the Dynamo forward.

Midfielder Stefanos Stamoulacatos entered the match when Logan Roberts was injured in the 65th minute. The final two substitutions for SFC were Marcello Palucci (80th minute) and Jerjer Gibson (86th minute), who came on for Ubiparipovic and Jelovac, respectively.

Syracuse FC had to survive nearly four minutes of stoppage time, holding off a desperate Dynamo attack before the referee blew the final whistle of the match. History was made: Syracuse FC had earned their first three points in the NPSL.

“It was an outstanding team effort in earning the club’s first ever result,” said SFC Head Coach Matt Tantalo. “An important win against a quality opponent, and a positive step on many accounts. We look forward to building on it and a big week ahead.”

SFC takes to the road next weekend for back-to-back games against thruway rivals Rochester Lancers and FC Buffalo. They will face the Lancers at Wegman’s Field on Friday, June 9th, then continue west for their first match against Buffalo at Robert E Rich All High Stadium on Sunday, June 11th. Syracuse FC’s next home game will be on Wednesday, June 14th, when they will welcome FC Buffalo to David W Murphy Field for a rematch.